Sometimes a building project can take twists and turns that you weren’t expecting!

This was the case for Richard and Hollie Gaze in Heol Rhyd.  What started out as improvements to their picturesque, hillside bungalow has turned into a complete rebuild of epic proportions.

Their current home was built into the side of a valley on soft ground. Having been extended twice in the past, one of the extensions had begun breaking away from the main house, hence the need for some refurbishment work!

The initial idea was to knock down the two existing extensions and rebuild them, whilst perhaps making a few improvements to the existing house at the same time.

However, there were difficulties with the ground conditions and a nearby mains sewer necessitated the use of piled foundations.  So, as with many such projects, the costs outweighed the benefits.  But, with the current house quite literally falling down and not wanting to miss the opportunity to build something really unique, Mr and Mrs Gaze decided on starting afresh, constructing a new build in the garden. 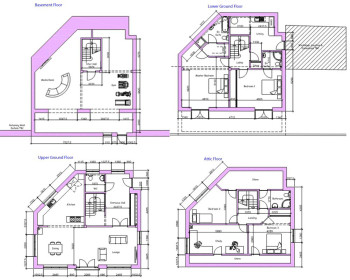 Due to the steep slope this resulted in a four storey house with the two lower floors below entry level.

The new plans added a gym and media room in the basement, bedrooms and a utility room on the lower ground floor, living and dining rooms on the ground floor and finally, some further bedrooms and study on the first floor!

Last but not least there was to be the construction of a 3m high retaining wall across the property to create some level ground on this very steep site.

As Richard explained, “One of the major benefits of having chosen Beco was that we were able to build a basement for the same cost as doing the piled foundations, gaining additional space and an interesting feature for the house.”

At last, with plans finalised, planning permission was approved and the builder booked – work could now begin on the construction of this exciting project!