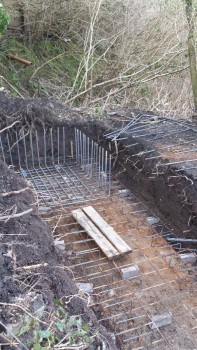 With a mixture of trepidation and huge excitement, the construction of the house at Heol Rhyd began.

Our previous post covered the planning stages of the project, and highlighted the various site conditions and cost implications that resulted in a complete re-design from a two storey extension to a four storey new build.

The first task was the footings for the retaining wall, which required a huge, steel-reinforced, trench, filled with concrete.

The basement was then built, and buried, which involved surrounding the new walls with tons of gravel chunks, a labour-intensive task!

From day one, Richard and Hollie have been full of praise for their build team, Matt Soady Greenbuild, to quote Hollie “our builder is a gem, very patient and a great support.”

The insulation, membranes, steel, and underfloor heating pipes went in and it resembled, as Hollie put it, “a giant game of snake!”.

This was then filled with what appeared to be a massive amount of concrete, and leveled.

Now, the Gaze’s were able to see the shape of the house, and get a real feel for its size.

At last, foundations were completed, and the building team took deliver of a very appropriately decorated home-made cake!